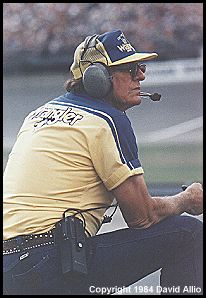 Bud Moore was a big, raw-boned kid in the summer of 1944 when he pulled away from the dock in Liverpool, England. He and a couple of million like him were about to do a lot of growing up.

“They sort of briefed us,” Moore, who’s now one of the veteran team owners in Winston Cup stock racing, said. “They told us we were going down and having a dry run to make an amphibious landing on the English coast…. When we moved out into the Channel, all I could see was ships just as far as I could see – thousands of them, just thousands of them.

“I told some of my buddies, ‘Boys, I can tell you one thing: This ain’t no dry run. This is the real thing.'”

As it turned out, it was a dry run. Or, rather a wet one. The weather would not break for nearly two days.

The “real thing,” coming on the morning of June 6, 1944, was like nothing mankind had ever seen. The Allied forces, some two million strong and with, as Moore said, thousands upon thousands of ships and airplanes and tons of armament, were about to launch the largest invasion in history. Their job: to wrest Europe from the grip of a madman.

In 1944 Moore watched that display with the awe of a kid barely out of high school. Fifty years later, he recalls it with the same feeling.

“The big Navy guns on the big battle wagons began blasting with the 16-inchers, and you could see the shells land. The way they were firing the guns, and the way the stuff was flying and everything else, you’d have said nothing could stay alive up there. It was the doggoned-est sight you ever saw.”

Moore went ashore with the Fourth Infantry Division at Utah Beach were, comparatively speaking, casualties were light. Less than 200 men died in the invasion at Utah; Four thousand perished on Omaha Beach to the east. But, said Moore, it was still no picnic.

“When I went off the boat, the water was up shoulder high. We had 150-200 yards to go before we ever hit sand, probably 150 yards to where we got to water that was knee-deep. And all the shells coming in there.

“This one boy to my left, or right, I don’t remember, got a direct hit. He just disappeared. All this stuff flying, and I was so scared I didn’t know what to do. I just know I run through that water as hard as I could, and I run across that beach and I got over behind some dirt, maybe 10 or 12 yards right off the beach.

“I stopped long enough to catch my breath.”

It would be one of the few times over the next nine months that Moore – or anyone else – would have that chance.

Before Moore would board the USS Excelsior (named, ironically, for Excelsior Mills in Union, 20 miles from Moore’s home in Spartanburg) to come home, he would have engaged in five major battles, been awarded five Purple Hearts, and two Bronze Stars for valor.

Four of the Purple Hearts were awarded for separate shrapnel wounds; the fifth for a gunshot wound. The first Bronze Star was given for his staying on the front lines for nine months and 14 days without having to be evacuated. The second was for capturing a German army headquarters.

Moore and another man, named Hess, were driving a jeep through the countryside to meet the rest of their group when they saw two German soldiers leave a farmhouse. Moore fired into the house with the machine gun mounted on the jeep, and the house caught fire. They captured a soldier.

Then they took a wrong turn and came upon a two-story building. They were fired upon and returned the fire. Hess, who Moore said spoke a little German, told the soldier they had captured to go to the house and tell the soldiers to surrender, or he’d call in artillery.

“Hess said, ‘We’ll blow ’em to hell.’ …In a few minutes, the white flag came out the window and they started coming out of there.

“I didn’t know what to think. Here they all come piling out. It was the damnedest thing you ever seen. All these men. And there we’d caught a whole German regimental headquarters (four officers and 14 enlisted men).”

With the Germans in tow, they retraced their path and eventually found their group.

“So here we come over the hill,” Moore said. “We get over in the town and the commanding officer said, ‘Boy, what in the hell was going on over there?’ And I said, “Well, damn, man, you sent two of us over there and we had to capture a whole army.”

“He said, ‘What was all that shooting over there?’ And I said, “Well, we was having a little trouble.'”

Moore’s outfit fought its way across France and into Germany before they were called back for a rescue mission. The 101st Airborne Division was besieged at a town called Bastogne, in Belgium, and needed help.

“That was the first time I ever saw (General George) Patton,” Moore said. “He had a megaphone and he was briefing everybody as to what was going on up in Bastogne. He was standing on the courthouse steps…He had those pearl-handled pistols on, and a little old white dog.

“That guy rode the front tank. That was the neatest thing about Patton. Any time there was a real hot spot, he wouldn’t send a man somewhere he wouldn’t go himself.

“I actually believe, if you asked any man in the Third Army, they’d have followed him into hell. He was a commanding general who wouldn’t send you anywhere he wouldn’t go himself. I saw him up on the front line – and I man, we was getting the hell kicked out of us – and he’s up there finding out what the heck’s wrong.”

The end of the war in Europe found Moore just outside Pilsen, (now Pizen) Czechoslovakia. He stayed as part of the occupation force at Weiden, Germany from May until November, and was part of the first wave of soldiers to return home.

“They sent us back on the points system,” he said. “You got so many points for the Purple Heart, so many for the Bronze Star, so many for the major battles, and points for how many months you were overseas on combat duty…..I had more points than some of the guys who had been in the Army for six or seven years.”

The title of “hero” would not sit comfortably on Moore’s shoulders. He was just one man among millions doing a job that had to be done. But he does take pride in that.

“If you go back and look at the whole story, what we all went through over there to make us free and all the other countries free,…there was a lot of lives gave over there.

“People ought to thank God every day for the freedom they’ve got now.”